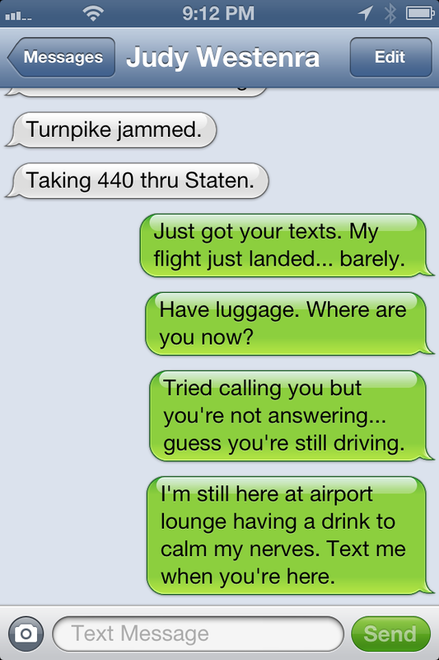 What a terrifying trip I had. I have never been so glad for a flight to be over. The storm and turbulence was bad enough. My window was in the middle of the plane and my gaze was riveted to the tip of the wing. Lightning flashes kept ripping the sky open and I fully expected to see one of them strike the wing like in many movies I've seen.

When I'm nervous, I like to write but I was forced to put all of my belongings in stowaway as they were preparing for the worse, which only served to add to my anxiety. It was then I regretted having switched to electronics and missed carrying a spiral bound notepad like I used to in high school. It was at this moment that I realized how dependent I have become of my devices. I haven't worn a watch in at least ten years. Every phone I've had in the last decade has had a built-in timepiece. When I no longer had access to my phone it felt like an appendage had been cut off. The in-flight entertainment had been turned off and there was nothing else to distract me from the feeling of impending doom, except counting the intervals between lightning flashes and thunder.  As the time between the two shortened, the intensity of the thunder increased.

I had been so preoccupied with my own fears that I was oblivious to the gentleman seated right next to me. Well, not right next to me. I was on the window seat, he was in the aisle seat and there was an empty seat between us, which was nice for some extra elbow room.

A loud thunder clap seemed to rattle the plane so hard, I half expected to see the wings torn off by the force of it. The man next to me started to scream. At first I assumed that he had been startled by the thunder clap like everyone else but he was screaming in some other language. It took me a moment to realize it was in Latin. Something to the lines of 'The Devil has returned!"

Without any warning he unbuckled his seat belt and bolted up and ran, screaming in Latin. I didn't know who he was or even his name but since he was sitting next to me I found some odd sense of responsibility, and was surprised to find myself running after him.  It was not a large plane and it didn't take me long to catch up to him.

"Stop! You can't open that!" screamed a flight attendant. I passed through the curtain divider to see the man was at the door of the plane, his hand reaching for the lever to open the door to the outside.

"You cannot open that door!" repeated the flight attendant with more urgency. I opened my mouth to chime in but my voice seemed too terrified to be heard. My eyes were fixed on that door. I had seen movies where people get sucked out of the plane. I wasn't sure if it was true or not but, not being strapped in and standing so close to the door, I really didn't want to find out.

The man shook his head and replied, "I can't go back. He's come back. The devil is back."

"Step away from the door!" a more authoritative voice commanded.

I turned to see a young man behind me, who was dressed in a polo shirt and khakis  He was holding a small black pistol, which was less than an arm's reach from me. I had never been so close to a firearm before. I assumed this was the Federal Air Marshal, who was dressed to blend in with every other air traveler. I turned to see that the man at the door had not moved at all. The Air Marshall aimed his gun at the man's torso as he continued, "If you don't step away from the door I will be forced to shoot."

I saw the Air Marshal's finger inch toward the trigger. I was about to witness a death.

The man at the door turned at the sound of my voice.

"Do you know this man?" the Air Marshal barked at me.

"No," I whispered not taking my eyes off the man at the door. "He was just sitting next to me."

Even though he had been sitting next to me, this was the first time I actually took a good look at him. He seemed very pale. Sporadic strands of gray stood out against his dark hair. I guessed him to be in his forties but there was something in his steel blue eyes that seemed... not only frightened but lost. Even as I write this I can't find the adjective that describes the haunted look I saw in this man.

"I can't find my cross," repeated the man. "I have no protection."

"You can have mine," I said as my hand slowly moved to my neck and, trying not to make any sudden moves that may startle the man or the Air Marshal with the gun still next to me, ever so carefully pulled the chain over my head and held it out to the man at the door.

There was an odd expression in his eyes as he looked at the cross I held. It was the only thing I had from my father. It was silver cross with a circle in the center - almost resembling a Celtic Cross but the design was not actually Celtic. Despite trying, I hadn't ever been able to find anything else about it.

He is hand trembled as he reached for it, I held it just far enough for him to have to step away from the door to grab it. The moment he grasped my cross, the Air Marshal sprang forward and forced the man to the ground.

"Don't hurt him," I pleaded as I saw the Air Marshal bind his hands with what resembled a large garbage-bag tie.

The flight attendant took my arm and said, "Let me take you back to your seat, Miss."

I sat at my seat in stunned silence, no longer aware if the storm was still raging outside or not. The events by the door kept playing over and over in my mind. I was barely aware that the wheels had touched down on the runway and the momentum of the plane began to slow drastically. I seem to recall the Captain's voice on the speakers but it seemed like it was a hundred miles away and none of it mattered.

I was touching where I had worn my cross for most of my life. I wore it so often that now I felt naked without it. It was the only thing I had from my father and even though I never met him, for the first time I realized something was missing.

"Excuse me, Miss?" The voice of another flight attendant startled me. I looked up to see that everyone had disembarked from the plane. I hadn't even been aware of them filing out.

I maneuvered down the aisle of the plane with my carry-on luggage and was surprised to see the Air Marshal standing outside the plane with a tight grip on his prisoner.

"He asked to see you," whispered the Air Marshal.

"To thank you and give you back your cross," added the man.

The Air Marshal held out my cross. I was so happy to see it. Yet I still found myself asking, "Didn't you say you needed a cross?"

"Yes, but this one belongs to you," smiled the man as I took back my necklace. My fingers clutched tightly around it. The man continued, "Never give it up again. Wear it... for  your father's sake."

I smiled as I held it. Then his words sank it. My father's sake. What did that mean? How did he know it was from my father?  When I looked up to ask him, both he and the Air Marshal had disappeared into the crowd. 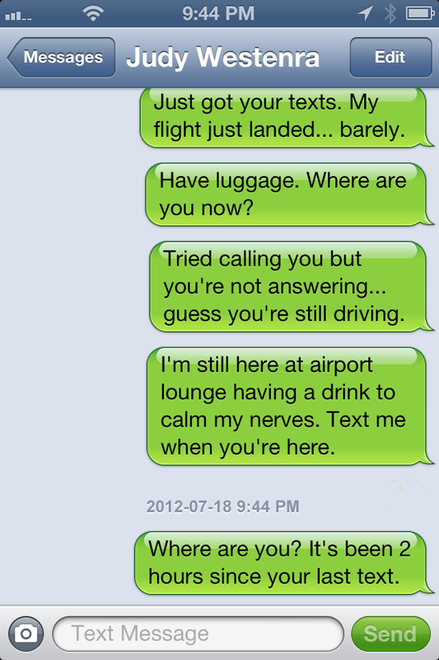 In a cab heading to Staten Island.

I called Judy's phone again and she finally answered and muttered, "I'm in an ambulance!"

The rest of her words are a blur in my mind. There was a car accident. Judy was found unconscious in front of her car. There was someone else involved.

I'm heading to the hospital now, and the traffic isn't moving.

What else could go wrong tonight?

Other works by Alexander Galant
Powered by