2030hr.  - Wanting to focus on my work, I responded to a call from Department of Homeland Security to lockdown and secure the area surrounding the wreck of the Demitry on the beach of Wolfe's Pond Park, Staten Island until the Coast Guard Investigative Service arrived.  Due to road closures they were slow to arrive.

No sign of movement on the ship. The rain had washed away any tracks, except two canine footprints in the sand shielded by the listing hull. Judging from the size of imprint: a very large dog. Nearby sign indicates dogs are allowed on this beach so long as on a leash. No human set of footprints accompanying them. Typical.

Human arm found in the woods by Helen Chandler who was walking her dog. Did not touch the limb but upon visual inspection of lacerations and bite-marks on the skin, it appears that the limb was torn off by a wild animal or a large dog. 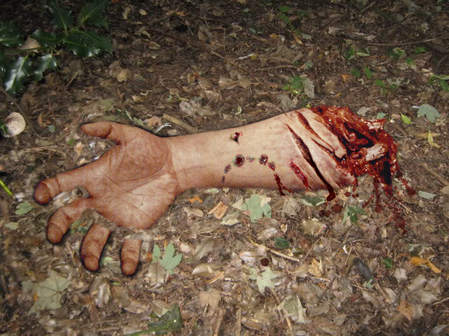 Arm found in Wolfe's Pond Park. - Photo by Det. Kate Reed
I have confirmed that Ms. Chandler's poodle-terrier mix lacks the size of jaw or mass to be the culprit. There is no other body part in the area nor is there any evidence of blood. It has either been washed away from the rain or the arm was dropped here. Awaiting forensic team to arrive.

2135hr  - Crime scene has been taped off. Forensic team is searching the area. No sign of any other body parts. Rain has washed away any evidence. Another search is scheduled in the morning during daylight. Uniformed officers are standing guard.

2140hr - Overheard chatter on radio of a traffic accident on Hylan Blvd & Wolfe Pond Park. "Driver first reported hitting a large dog but a human male had been found without vital signs."

Going to investigate. 'Big dog'? What are the odds? Also would like to ascertain if 'human male' had all limbs intact.

2200hr - Arrived at scene of MVA (moving vehicle accident). Paramedics had just left with a casualty and driver. Area still closed off for on-going investigation surrounding a pink BMW with its front end smashed in and windshield shattered.

"No, the victim had both arms," replied Officer Thompson, who looked at his partner with an odd smirk.

I enquired what was so funny.

"He had..." began Thompson who looked has Officer Moore for help with spitting out the information.

Moore continued, "He had hair on his palms."

As I was certain I didn't hear correctly I asked him to repeat what he stated.

"While they were checking for vitals the paramedics pointed out fine hairs on the palm of his hands.  You know what they say about hairy palms..." Moore smirked.

Thompson added, "Paramedic said it could be some disease that causes unusual hair growth."

I recalled the term from another murder case involving a freak show in Long Island. I had thought it to be an entire body condition, not localized to a single body part like the hands. "Could you tell me anything else about the victim? Any other marks or injuries?"

"Emaciated like there was only skin and bones on his body... muscles looked withered away," said Thompson.

"I took some pictures," added Moore as he began to scroll through his phone.

"If he was as emaciated as you say...how did he get out to this road?" I enquired.

"Son of a..." cursed Moore. "What happened to those pictures? I was sure I took pictures of the victim. Even made sure I had his stringy white hair in the shot."

"Maybe you deleted them?" asked his partner.

"I'm not an idiot! I never delete at the scene. Never."

"Did anyone see a large dog?" I interrupted.

"No, the driver originally claimed in her 911 call to have struck a large dog, but no sign of any dog here. There were tracks over on that side, where we estimate the victim had crossed from."

"Could they have belonged to the old man?" I wondered aloud.

"Those tracks could have been here for days," added Thompson.

"It's been raining all day... those tracks had to have been fresh." I added. "Anything else you can tell me about the victim?"

"Judging from his rotted out shoes, likely homeless."

"What about the driver?" I asked.

"Young girl. Judy Westenra. She was apparently found unconscious at the scene. Likely in shock. She was also taken away to the University Medical Center."

At the hospital, sitting in the lounge gathering my thoughts. I have been awake for almost 24 hours but am unable to fall asleep as I'm so wound up.

I had arrived at the hospital and had lied to say I was related in order to see her in Emergency.  When I entered her room I found a nurse drawing blood from Judy. Wasn't sure that was a great idea as she looked very pale... paler than usual. But I suppose surviving a car accident would make me look pale as well.

Before I could get into conversation the police entered to question her.  Asked me to leave.

"Dysis, you forgot your phone," said Judy weakly holding out the sparkling pink rhinestone covered iPhone case. (So not me.)

"Oops. Sorry," I exclaimed as I took her iPhone. "Would forget my head if it wasn't attached."

With that I left the room quickly. Out in the lounge I wondered why she wanted me to take her phone.

I knew her passcode. The same passcode she uses on everything. I felt awkward browsing her phone history, all the missed calls from me and a call to 9-1-1 at 8:55pm.

I didn't want to be nosy but for some reason she didn't want the police to see her phone. I opened up the text messages and saw all my messages from the airport. Then I saw the messages from Eric Holmwood.  I remember him from sociology class. A bit of a clown, but saw him play the lead in campus production of Jekyll & Hyde. Quite talented. I did not know that Judy knew him.

Then I spotted the attachment from Sibyl Seward. (opened up the image) Could not make out what it was. Tried to rotate the image but the phone's built in image adjuster kept rotating the image to its original orientation.

That's when I noticed the time of the last text from Judy: 8:52pm  Three minutes before she called 9-1-1. She had been texting and driving at the time of the accident. I took a screen capture of the texts and e-mailed them and the attachment to myself. Then I deleted the text messages.

As soon as I had done so, I felt as if I were drowning in my own guilt. I had deleted evidence while a police officer was a couple of feet away. I should not have done so but my loyalty to my friend momentarily clouded my judgment. I had an overwhelming urge to throw away the phone. Hide evidence of my transgression.

Just then the blustery form of Judy's father, Byron Westenra, went storming past me. I had never met him in person but I recognized him from his picture in the papers.

"What is the meaning of this?" he bellowed as he burst into the room. "No one questions a Westenra without one of our attorneys present."

"There is no need for an attorney, these are routine questions as we gather information about a motor vehicle accident," replied the voice of the police officer.

"Any information you 'gathered' will be suppressed I assure you," barked Westenra.

The police officer responded but I couldn't make out what it was as a hospital page happened simultaneously.

A moment later the police officers emerged from the room, mouthing a two-syllable word of what they thought of him. I pretended not to notice them and act was if I was busy checking my e-mail... in Judy's phone.

"Judy, what happened to the car?" Byron Westenra's voice continued to bark.

I thought it interesting how he demonstrated his priorities. The Westenra name came first, then the car. He hasn't even asked her if she was all right.

"Damn it! Do you know how much it cost to custom paint that bubble gum pink you wanted? There better not be a scratch in it."

"But you'll be happy to know your daughter doesn't have a scratch," I said as I walked into the room. I knew I was out of line but this kind of thing irked me. He turned and glared at me as if I was some cockroach on the wall.

"Who the hell are you?" Byron Westenra snarled.

Judy stuttered to extinguish the situation. "Uh... Daddy.  This is my friend from school... Dysis Harker."

"Harker?" he sneered, ignoring my outstretched hand. "Is this some kind of joke?"

"You are the second person to say that to me in as many days. What is it with my name? It's not remotely common or comical as far as I can tell."

"You've never mentioned your friend before."

"I mention her all the time. In almost every e-mail that I've sent you... the ones you're too busy to answer."

"I don't like your tone, young lady. When you have as much responsibility as I do you'll see there is no time for frivolous e-mailing and Face-twits."

I opened my mouth to correct him but the flash of panic in Judy's eyes warned not to rock the boat any more than I already have.

Find out what you can about a Dysis Harker. She's my daughter's college roommate. Need to know if her name is actually 'Harker'.  If so, I want to know everything about her.

I was sitting in Judy's room with the lights off. The storm clouds had passed and the moonlight was shining through the Venetian blinds. Thought I heard a scream in the hallway. I glanced over to see a wolf pass by the room. It looked in at me. Its eyes were red. I was petrified and couldn't move.

It turned away and continued down the hall. I got up to close the door and saw that it had left a trail of fresh blood. Was it wolf blood? Or something it killed?

Woke up with a start. There was no wolf. No trail of blood. The clouds were obscuring the moon. I glanced over to see that Judy was not in her hospital bed. I went over and knocked on the bathroom door. No one inside.

Her clothes and expensive Manolo Blahnik shoes were still in the closet of her private room. She would never leave a $400 pair of shoes behind. She must have gone for a walk but her cellphone was still next to her bed. She never goes anywhere without it.

Where was she?
Inter-office memo - AME (Assistant Medical Examiner) to Morgue Technician

We will need to re-take X-rays of John Doe. Perhaps a 3D CT scan in case it is more than just a bad batch of film. (See attached) 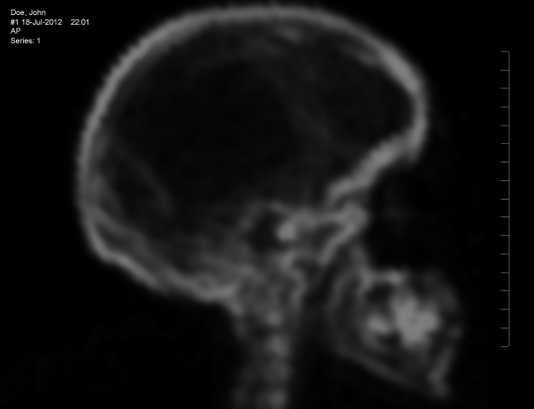 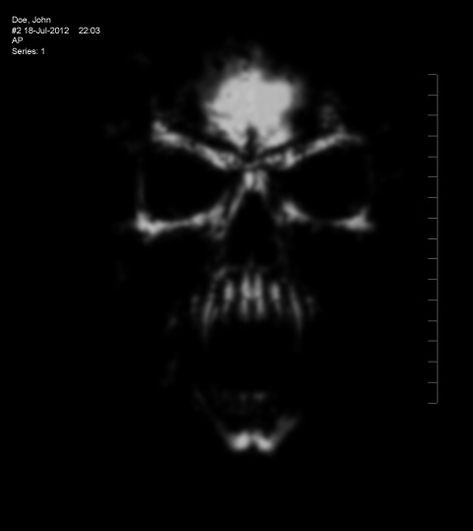 Transcript of Voicemail from Morgue Technician to AME

"We have a problem. I went to the morgue refrigeration unit to find John Doe's drawer open, his body bag has been torn open and his corpse is missing. I've searched the..."